It was again my great privilege and honour to deliver the accolade to the winner of the Conservation Award at the ECS Conference this year. Here is the full text and some photos.

The ancient norse-peoples were great appreciators of the goat and these robust little animals feature strongly in the stories of the norse gods.

In the Stone Age, goats were undoubtedly important resources and probably greatly admired for their capacity to make a living from poor scrub, general ruggedness and handsome good-looks, but you may be surprised where they appear in mythological form.

The whole world now knows Thor – the thundergod – reincarnated in Hollywood films, based mainly on the Marvel comic version - but originally Thor, the thunderer, comes of course from ancient Norse legend, as the popular golden-haired son of the one-eyed King-God Odin.
[Thor]

Thor is a manly-God - incredibly strong, given to brawling (often with many-headed giants), lifting very big things, drinking vast amounts of mead and eating several whole beasts at one! He is also the bearer of the famous unpronounceable short-handled hammer – [MJOLLNIR] - [ask for audience help] – which he can throw at things and it will return. But it also has another less well known power to which I shall return.

First we move to Thor’s chariot – is the mighty thunderer led by a brace of flaming stallions? Perhaps a team of dragons, reindeer or at least some bison? No. You may be surprised to know that it is goats that pull the chariot of the most popular of all gods ‘the Mighty Thor’[IMAGE] – seen here in his finest dress-shorts. 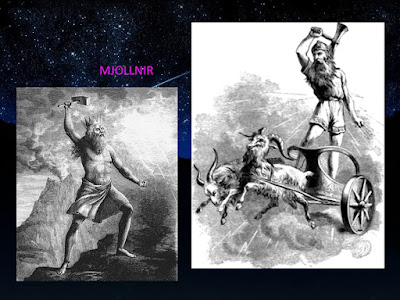 These two mythical goats – which are called something like Grinder and Tinder (loose translations there) – had the added attribute that they could be killed and eaten each night and then – as long as the bones were kept intact – they could be magically resurrected – by Thor’s magic hammer - used to pull his chariot again and, again, eaten. Not much of an existence for the goats you might say but perhaps they gained some quality of life from amusement at the state of Thor’s shorts.

(Curiously, the ability of the hammer to resurrect goats has featured little in the Hollywood incarnations of the mighty thunderer.)

The prevalence of goats in pagan norse saga may even help to explain the rather goaty-nature of the depiction of the devil in Judeo-Christian tradition.  The early Christians saw the pagan’s goat imagery as evil and so aligned the goatiness with this.

I should probably now divert briefly from mythical goats to the ECS Mandy McMath Conservation Award.


Mandy’s views on goats are unknown to me (uncomfortable Segway) but she worked for the conservation agency, the Countryside Council for Wales – a government body charged with the protection of the natural resources of this robust little country. Among her legacies are a line of marine protected areas that cover much of the Welsh coastline. You would rarely find her strutting the stage at conferences – but she did do field research and. importantly, she understood and interpreted science in her work - in fact she was probably a little shy – but by diligently working behind the scenes, she made things happen!

So here is one of the themes for this year’s award – achieving real conservation benefits takes a village; maybe a big town or small city in fact – and this includes those that labour mainly out of the spotlight and put all the pieces together and then work to keep the initiatives functional and functioning.

Just a few words about the award and how we now make decisions.

– with the agreement of the Grand Wizard of the ECS and all the little wizards – the judges for the award are now a panel formed of the previous winners. We thought that there could be no better people to take on this task. They are assisted by an advisory group – which includes representation from the ECS Council and those who have wisely guided the award since its inception. (And my thanks to all these people this year for their swift and clear deliberations and conclusion).

We intend next year to give the award a particular spin by giving it to someone who is within a couple of years of completing their graduate or undergraduate work. In doing this we are hoping to encourage the next generation of conservationists. So please look for details of this ahead of the next conference.

Returning to this year, we had again excellent candidates proposed and again a difficult decision – please do not be too disappointed if your candidate did not come through this year, there is always next time!

One strong criticism has been leveled at the award in recent years and this is that all the winners to date have one little obvious thing in common [call up photos]– whichever way you look at them, they all appear to be male.

Perhaps this year is the time for a female winner. Do you think so?

(Well actually it does not matter what you think because the decision is already made.)

In the spirit of Mandy’s great good humour in previous years I have tried to share some humorous observations on the year that has passed since the last conference – and simultaneously showing off my knowledge of popular culture. Featuring for example the Miley Cyrus, the Kardasians and who can forget my observations on funny old Donald Trump last year…. Not so funny now… and I am bored with the Kardasians (although I still love Miley) and so instead this is why you are getting a short lecture on the goat in Norse Mythology.
[award slide]

Because I believe that the winner this year will not think themselves worthy, I am going to let you, and them, know that this decision received unanimous support

Here is some words from the nomination received: this person is describe as having a ”seemingly effortless way of making things work”. Deploying  “diplomacy, logic, linguistic skills and great charm in the best interests of conservation”. And they are describes as being a ‘people-person’ and a wonderful …skilled and patient communicator,….respected, trusted and liked by people … from an astounding range of disciplines, cultures and walks of life.

Ladies and Gentlemen – Conservation is hard to achieve (and this has been a theme of this conference), it can certainly be inspired by lone individuals but it takes coordination, cooperation, inspired bureaucracy, diplomacy and sheer hard-graft. The people who labour in the national and international bureaucracies trying to implement and effectively interpret the decisions taken by nations and political leaders to better protect, manage and conserve resources, are typically little recognised, but only if they do their jobs very well can appropriate outcomes be achieved. At national level we have various conservation agencies and at international level I am thinking of bodies like the great Multilateral agreements – big old beasts like the International Whaling Commission and the various bodies nestled under the United Nations like the CBD, CITES, CMS and such.
CMS – the Convention for the Conservation of animals that move around a lot has given to birth to two daughter agreements and many other initiatives aimed at cetacean conservation – in our region (now known as Europe and Little Britain) we have ACCOBAMS and ASCOBANS. These agreements oversee a wide slew of work from identifying and endorsing key research, through education and outreach. CMS, at its last conference of parties has also recently concluded resolutions generating new innovative workstreams on Live Capture of Cetaceans from the Wild for Commercial Purposes and the Conservation Implications of Cetacean Culture.

And it is not coincidental that the person that we are about to recognise (who is now panicking) has helped facilitate these innovations.

Such work is driven by a team of inspired, dedicated, hard-travelling, folks.

Today we shall recognise one of them.

First, I should conclude my norse goat lecture – as I was distracted –

You will probably have all heard of Valhalla. This is where the warrior dead are received and kept happily feasting and drinking until Ragnarak – the final great battle. And the supplier of the endless vat of mead on which they sup is not a vast bee hive or a great bee or - as you might more reasonably expect – no – it is (can you guess?) a goat living up on the roof where it feeds on the tree of life.
[Goat]

Do you know this goat’s name?

[The audience did not know – so name beamed up on screen?] 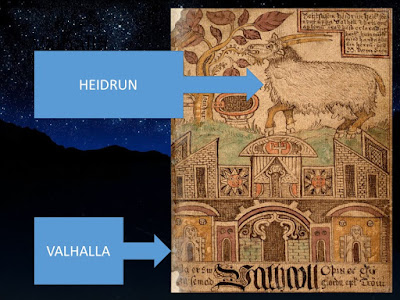 I wonder if there is anyone by this name here?
[There is!]

What a strange coincidence.
Do you ‘identify as female’? [nodding]  That could be helpful, please don’t go away.

This is an award for the person, but we should also note the quarter century anniversary of ASCOBANS itself being celebrated his year - an agreement that was put into place very specifically to try to protect the future of Europe’s small cetaceans.

Would you like to see some images of a conservation diplomat in action? 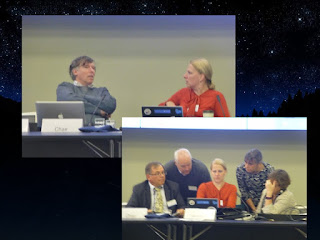 Here first we see poor Heidrun having to deal with some difficult crusty old scientist and then [next]  – more typically, right in the middle of the action trying to make sure that whilst countries don’t go over their mandate, something useful is agreed. By the way Heidrun has served as the ASCOBANS Coordinator and the CMS Marine Mammals Officer for almost a decade.

And I think at those monstrous big international convention meetings, like the CMS Conferences of Parties, it is Heidrun who is deployed to go and sort out much of the difficult stuff – say Bradney, the Executive Secretary of CMS, has spotted on camera three that the lady from ‘We Love the Little Dolphins’ has ‘the Senior Vice President’ of the ‘Happy Dolphin Spa’ in a head-lock in meeting room twelve. He consults quickly with Melanie, CMS marine lead, and they press a special button and redoubtable Heidrun is let loose to sort it all out.

This is an award for a person but it clearly shows recognition being extended to those who labour largely out of the limelight, working diligently, carefully and often with what might be called a ‘focused inspiration’ and great dedication to bring together players, counties, regional bodies and others and getting them to work together to crystallise out something effective; something that will make a difference – so this is a salute to all those who work in in offices of the IGOs and the agencies – the largely unsung – like the late and great Mandy McMath and like …………..

– the winner of the 2017 Mandy McMath Conservation Award.

Ladies and Gentlemen – please clap your hands and stamp your feet and call to the stage the queen of ASCOBANS, the champion of cetaceans, someone who is always there when you need them and the first female winner of the Mandy McMath Conservation award! 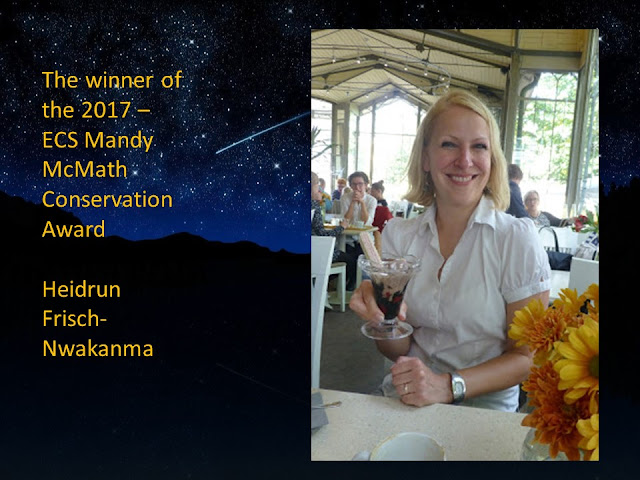