I was honoured again this year to be asked to present this award.

Further to tributes to Mandy McMath and Krzysztof Skóra and after a short pause I put the title of the award back on the screen and announced that we would now move to this year's winner.

The next slide showed Donald Trump.

I think there were gasps but I then apologized and said that I was sorry but in my rush to prepare for the ceremony I must have googled 'north american with interesting hair' and taken the wrong image.

I then noted that I was sorry that not everyone nominated could win this year, thanked those who had made nominations and encouraged them to try again.

We then practiced applause  by clapping those who has recently received their PhDs.

I announced that the award selection panel now includes the previous award winners and that we had had a complaint about the process. This stated that essentially since its instigation the award has been given by bearded individuals to other bearded individuals. I then showed images 'from the archives' of previous winners to discover if this was, in fact, true.

I then suggested that our community was typically a heavily bearded one not because we were lazy (or anything like that) but because many of us are field workers and - in the event of a demasting incident at sea - a heavily bearded companion could prove a life saver. Not only might he be lashed in place to serve as an emergency sail but in the event of moist winds, his beard might also be able to collect moisture which can then be sucked from it.

This is most well developed in 'the Whitehead' where the beard and remarkable head of hair would soon ensure a swift trajectory home.

Then I said the following (and my great thanks to Erich Hoyt and some of Hal’s colleagues for helping to assemble this and especially at such short notice and to Fabian Ritter for the photos).

This was presented to a backdrop of images of Hal in the field and his books and a large bottle of soy sauce.

Let us consider ‘the Whitehead’ further:

Hal and his various colleagues across the years – because no man is an island – have been pioneers in so much that we now take for granted in our work on cetaceans. This includes photo identification and the deployment of hydrophones, the analyses of social networks and, most recently, the elaboration of a theory of culture in cetaceans which not only challenges the way that we think of them but also our conservation approaches.

Here are a few highlights from Hal’s career:

• The early 1980s found him with his with his ‘hippie friend’ Jonathan Gordon sailing around the Indian Ocean having a good time and trialing some of those key approaches are now widely used; leading to a photo-ID revolution that changed the way we study whales using low cost, small boat, non intrusive approaches.

• His work on developing tools and methods (Socprog) for quantifying social behavior has greatly influenced a whole generation of students, and have led to awareness and conservation of whale societies in many countries.

• His work on the Gully of eastern Canada, could have just been discreet work on northern bottlenose whales and other species found there, but it opened the door to beaked whale studies, and it was then used to support the application of one of Canada’s first MPAs. He also contributed his data to the SE Shoal of the Grand Bank EBSA and MPA proposal and the Sargasso Sea EBSA, now a marine reserve proposal. Sperm whale data helped amplify the further protection of Ecuadorean waters around the Galapagos, and contributed to the large marine whale sanctuary there around the islands. Currently he has ongoing research projects in the eastern Pacific (sperm whales since 1985, most recent project 2013-14 off Ecuador), and northwest Atlantic (sperm whales since 1986, bottlenose whales off Nova Scotia since 1988)

• His work with Lindy Weilgart on acoustics and noise, and their opposition to Low Frequency sonar experiments was at first controversial, but very widely reported in documentaries and popular press and arguably brought this issue into the mainstream and helped lead to the current conservation concerns we have now about chronic and acute noise in the sea.

• Now with the study of culture, Hal has laid the scientific groundwork for a new dimension in conservation that has already shown very broad appeal. He has kept the scientific rigour of the work while also disseminating it freely and widely.
Through his books and papers in my view he has done for the whales what Jane Goodall has done for the chimpanzees and bonobos – he has interpreted them for us – introduced them properly to our species.

His huge publication record and the numbers of students he has had have had a huge impact for conservation, following his interests and his example.

But there is more to Hal than all these things – reports from his colleagues and students and my own brief interactions with him show that he is also a ‘nice bloke’ (this is a high accolade from one English-born man to another).

Let us consider him a little further. Here is what one of his colleagues who we have secretly consulted had to say:

“Hal has a super-fast charging inner battery. At sea he can work for weeks and rest for few minutes at times. When he's looking for whales, you often find him multitasking --steering the  boat, fixing the engine, writing a computer program, editing a book, reading another book, authoring a third book, adjusting the sails, making coffee, preparing dinner; all at the same time, with a big smile and positive attitude. At the same time, normal mortal grad students are crashing at their bunkbeds, as they run out of their young energy.”

What is Hal’s secret? Again to quote his colleague:

"Hal loves soy sauce. He puts it in everything he eats. He loves it so much that he considered adding a third tank on Balaena [his research yacht], so we could pump not only salt and fresh water into the boat, but soy sauce as well.”

So ladies and gentlemen – please prepare to receive to the stage the winner of the ECS Mandy McMath Conservation Award for 2016 – the remarkable and inspiring polymath, the wonderfully hirsute scientist-sailor, the great whale-interpreter - Professor Hal Whitehead.

A prolonged standing ovation followed during which the award picture and the award crystal were passed to Hal. 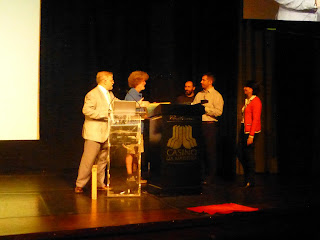 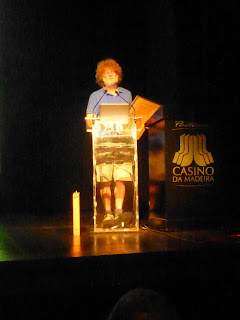