[ Highlighted text here indicates where appropriate (and inappropriate)images were shown.]

I was delighted and honoured to again be tasked with the delivery of the ECS Mandy McMath Conservation Award this year, and I said something along the following lines:

First I recalled Mandy McMath after whom the award is named using words written by her good friend Peter Evans in a tribute that can be found in full the SeaWatch Foundation's website HERE.

She was a true diplomat of the conservation world, offering wise advice, working away quietly and modestly towards those goals, wherever necessary cutting through bureaucratic red tape to achieve this.

Mandy was an eco warrior, not only for marine conservation in Wales but also throughout UK and beyond, with marine mammals being a particular passion, specially seals. She was also an underwater photographer and diver, and in her spare time, an accomplished gardener and an active member of her local community…. She was a very principled person, a committed vegetarian, and one of the first to adapt her house to renewable energy.”
Then my presentation continued thus:
Among the things that she championed and helped to establish was the ECS conservation award. Mandy believed that it was not just a fitting reward at a time when the planet has never more needed its conservation heroes - but it would act as an inspiration to the next generation of scientists and conservationists.
As most of you know by now this ceremony consists of me first trying to honour Mandy’s wry sense of humour by reflecting in a brief but deeply meaningful (and highly scientifically robust) way on the year since our last meeting and, simultaneously, dropping a series of clues as to the award winner until she (or indeed he) is revealed. And the event closes with your loud and enthusiastic cheering. Let me remind you that the award is for an outstanding contribution and hence your applause to this point has merely been practice. Wolf whistling and whooping is allowed.
[There is encouragement to wolf whistle at this point.]
However, unfortunately, nothing of any consequence that has happened this last year and therefore I have nothing to report.
And I am reinforced in this view by the fact that whenever I turn on my news media sampling device (or television) anywhere in the world I am consistently rewarded by documentaries focused on something called the Kardasians.
And I am perplexed as to what they are, where they come from …. And why we should in anyway care. My research indicates that Kardasia is in Armenia and that the Kardasians should in fact be a community of humble stone cutters. There is little sign of any stone cutting…. Or any discernible employment - But I believe they are K-selected – Kim, Kloe, Kourtney, Kris…. Krispy-Crème and so forth.
I have also managed to discern that this particular matrilineal society is somehow more famous when departing, rather than when arriving.
I am hopeful that in due course Barb Taylor will be able to explain to us whether this is a discrete population that we should or should not give a damn about. (And I believe that this may be the first time that this two great American icons - Kim Kardasian and Barb Taylor - have featured in the same presentation.
I have also noticed over the last year – with some pleasure - the continuing return of the beard as a fashionable facial attribute for young men. Of course some of us have championed it for many years. As usual you will have seen many examples around the conference halls ranging from the bearly-there why bother or ‘Ritter’ style through the neatly-trimmed or ‘Ryan’ style, to the more fulsome version preferred by the more old fashioned field scientists – as exemplified by the ‘Whitehead’ (to which I will return).
The younger men currently prefer a more fussy styled version complete with a full waxed moustache to complement their equally fussy hair – you young ladies must get really bored these days waiting for your boyfriends to fuss and fix their hair into many stylish waves and then wax and mouse their fulsome moustaches – This is Ryan tells me the hipster style. .  some thing to look forward to guys is the time when with maturity you can also wax and plait your nasal and ear hairs.
Personally – in terms of beard - I have always aspired to the full ‘Giuseppe’ – a neat cut (setting 3- 4 on the beard trimmer) – but I have failed to grow the highly expressive and effective mustache of the ecotype.
In fact I aspire to Italian approach to many things. Of all the nationalities of Europe and beyond, including the Armenians, it seems to me that Italians come with inherent style – it is simply genetic. The Italians even invited the word Ciao - which can be used to say both hello and good bye with considerable style! (It is also the only country where crime is properly organised). And you will all know this old phrase –
Then God decided to make sexy people – and he created Italians.
This style and elegance is of course typified by the Tethys research group as you see here practicing… I believe a strandings response practice. [Dolce and Gabana advert]
This research troop is elegant in its presentation and its work.
And I can, of course, find no better term to describe the president of Tethys than ‘elegant’ in all respects.
(And I would like to take this opportunity to apologise to Dr Notarbartolo di Sciara for mispronouncing and misspelling his name for the better part of at least twenty years.)
Moving rapidly on - Here is a famously bearded knight of Malta by Titian
The person that we honour today has some similar attributes – he (or she) has a distinguished lineage and like this image was produced in Venice (surely the coolest city in the coolest country).


I think I have probably narrowed the field enough to reveal (but hold your applause please) that I speak of none other than of course than a past president of the ECS, the current president of sexy Tethys and someone that we all owe a great debt to in terms of inspiration, education and science: Dr Giuseppe Notarbartolo di sciara.
Educated in Italy, Giuseppe moved to extend his studies in the US where he worked on beluga whales and whale sharks, as well as doing research with humpback whales in Hawaii and Bryde’s whales in Venezuela. He obtained a Ph.D. at the Scripps Instution of Oceanography (1985) in marine biology with a thesis on manta ray taxonomy and ecology in the Gulf of California. He discovered and described a new manta ray species, Mobula munkiana, which he named after his mentor Walter Munk. 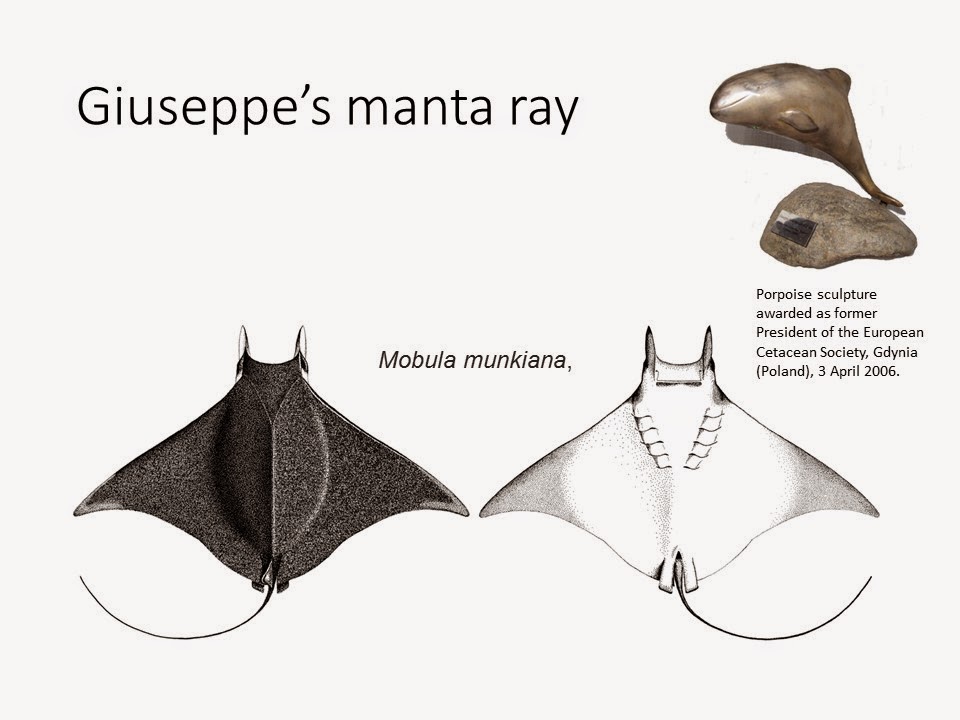 Undoubtedly, enriched by his time in the USA, Giuseppe moved back to his home country in 1985 where he started working on Mediterranean and Red Sea conservations issues.
In 1986, Giuseppe founded the Tethys Research Institute. Under his guidance it has conduced research focused on  Mediterranean cetacean ecology essential for the conservation of these animals.
A decade later, Notarbartolo di Sciara was nominated by the then President of Italy to lead the Central Institute for Applied Marine Research (ICRAM). He was President of ICRAM guided that institution in a more strategic direction and allowed the creation and flourishing of many important conservation and planning initiatives, including the strengthening of marine protected area design, coordinated research within MPA sites. Notarbartolo di Sciara has also served as the President of the European Cetacean Society  (1993-1997).

Today Giuseppe is well known throughout Europe as a conservation leader and  a television commentator with regular contributions to wildlife shows. In addition, Giuseppe has also been a stalwart of the Scientific Committee of ACCOBAMS and the Commissioner for Italy to the IWC.
I cannot begin to list his publications (there are at least 140 scientific papers with his name on them) … but would direct you to his website for more details. And I should make special note of his book on gambling. 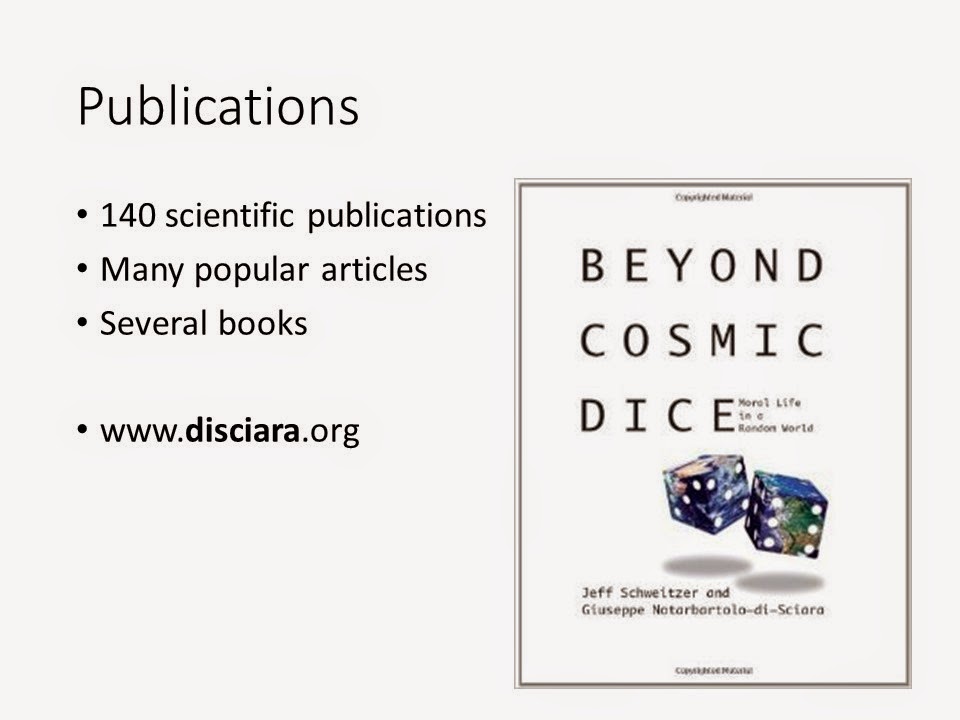 His current roles are numerous and I have listed the ones that I know of here [slide] there may be more. And I add here his latest.  (I forget the full title of this new role but is something like 'Conference of the Parties Appointed Councillor for Aquatic Mammals', but I am sure you will be representing other marine animals. )

Not surprisingly Giuseppe has been honoured for his work elsewhere (and we have to hope that he still has a little room on his mantelpiece for the ECS crystal. [A list of honours can be seen HERE.] 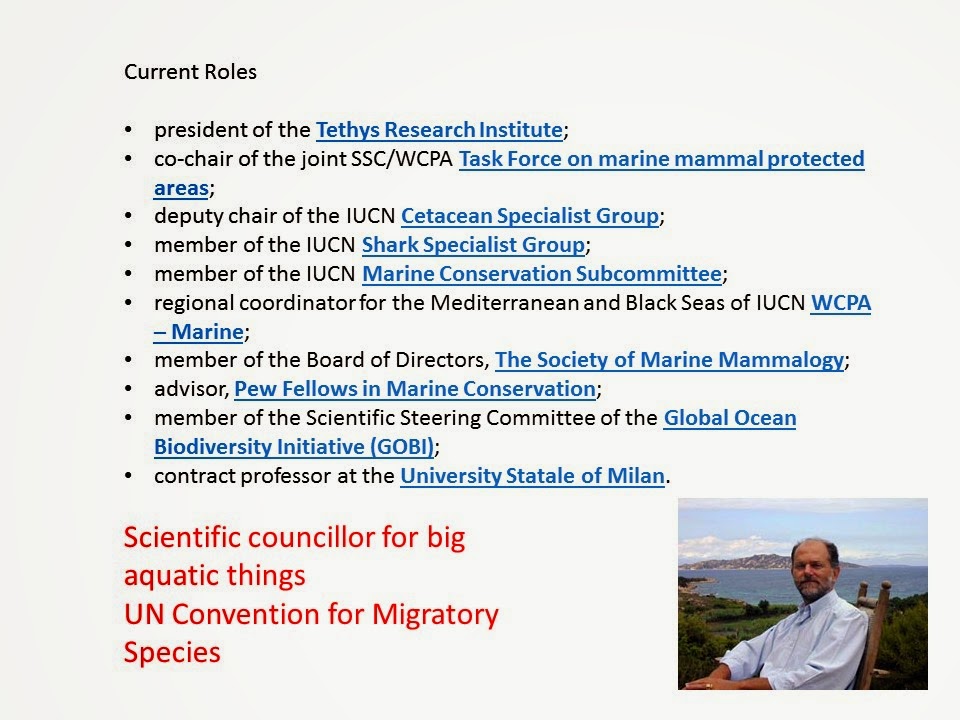 As you know his expertise extends to manta rays –and he even has a manta ray parasite  named after him. Here it is … and if we change the focus slightly you can probably see one reason why this happened. 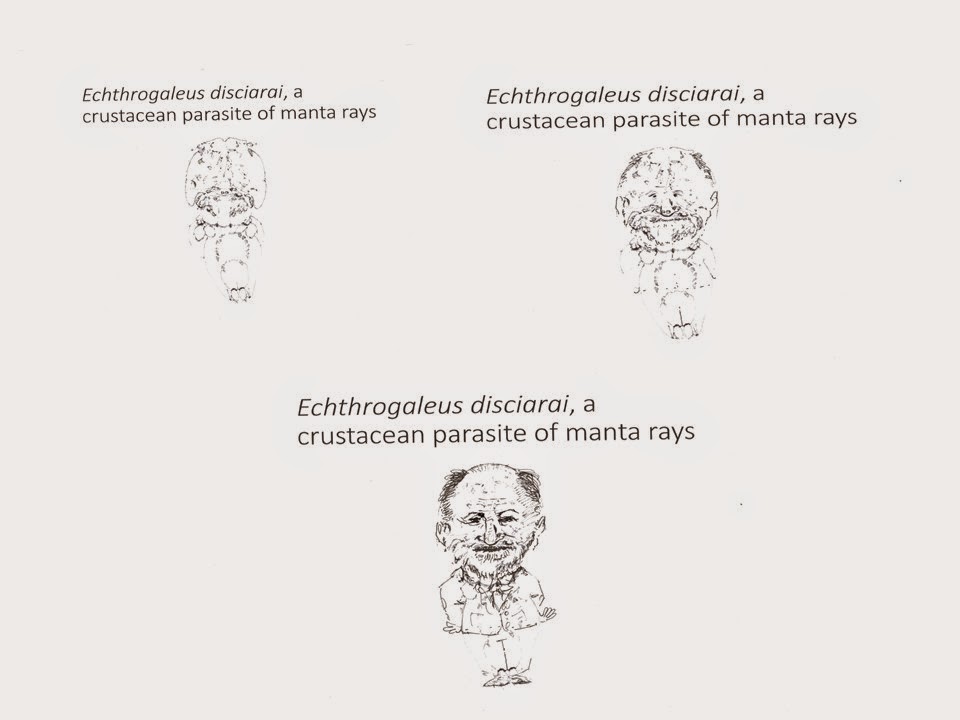 I want ’to make a pause here before we extend our full salute to this years conservation award winner (and also to provide a little warm up applause exercise).
Giuseppe emphasised yesterday the recognition made by the Parties of the Convention of Migratory Species at their last conference of the need to consider cultural units in its work. This highly important development was underpinned by the hard work of a team of people starting the godfather of cetacean culture Hal Whitehead and his colleague Luke Rendell and combined with all the efforts behind the scenes of my ex-colleagues and good friends at Whale and Dolphin Conservation.
There are layers of hard works that lead to the passing of a resolution in an international body. I have some idea of how hard the scientists, NGOs and the Secretariat worked to prepare the way for this conclusion. I would ask that the records of the ECS show that we celebrated this development and commended all concerned and that you signal your assent to this by applause.
[there was loud applause}

Now returning to the 2015 award-winner.
Some of us reflected on what made a successful person at the student careers workshop back on Saturday (which seems a long way away now) – I suggested drive, confidence and affability and that having a vocation may help.
Students I still stand by that and can commend no better example to you than Giuseppe.
But a vocation can be a hard mistress – and I know Guiseppe well enough to know that he is sometimes frustrated and distressed when things get worse rather than better on his watch.
An award and the celebration associated with it we all hope will act to boost Giuseppe ever onwards and upwards to ever greater things. So please now be prepared to show your appreciation as we celebrate the life’s work of this modest knight of Monaco, child of Venice, wise gentleman of Italy, friend of manta rays and marine mammals, proud beard wearer and citizen of the world.